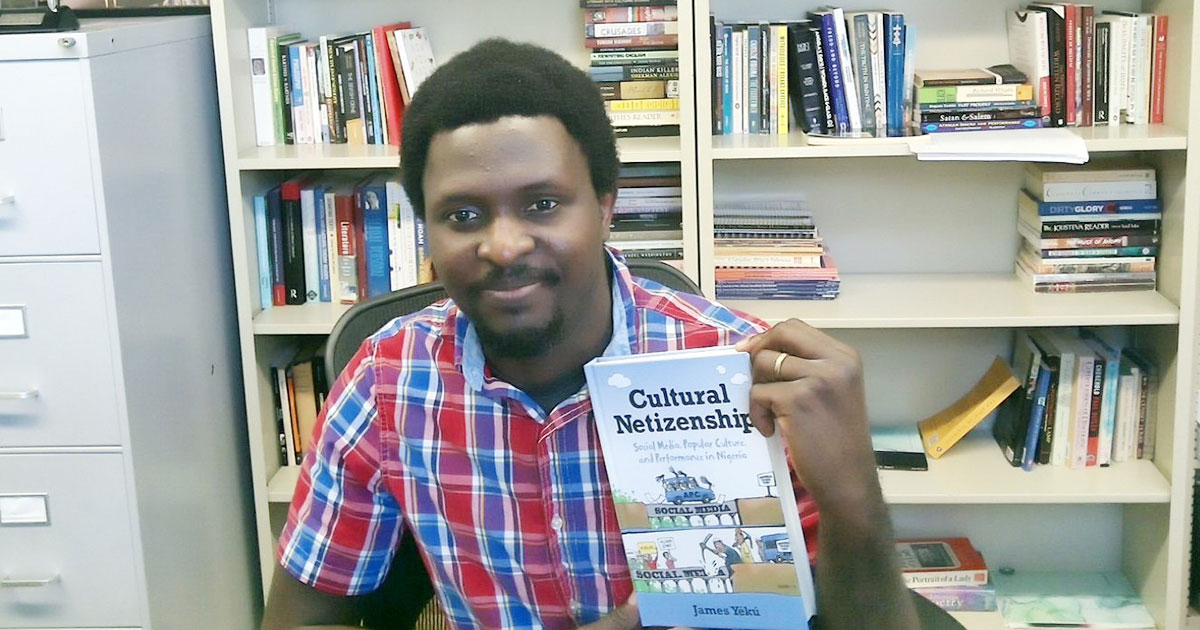 LAWRENCE — The idea that humor is an appropriate response to oppression and is used to shed light on truth is old, and it returns yet again with a new twist in a new book by assistant professor James Yékú African Digital Humanities at the University of Kansas, titled “Cultural Netizenship: Social Media, Popular Culture and Performance in Nigeria” (Indiana University Press).

If Western audiences think of Nigeria and social media together, they may recall the global #BringBackOurGirls hashtag campaign spawned by the 2014 kidnapping of 276 school children by Islamist terrorists Boko Haram, or the more recent campaign #EndSARS campaign against police brutality by the Special Anti-Robbery Squad.

While Yékú’s new book reflects these deadly and serious endeavours, it has also focused on the daily online performance of resistance to “abjection”, or lack of political power, experienced by ordinary Nigerians, in particularly cultural expressions that rely on humor as a means of politicking. He cited, for example, memes from 2015, after the hashtag #IstandwithJega was born on Twitter in support of the head of the electoral commission, Attahiru Jega. The hashtag had become a statement of confidence in Jega, who was seen by many in the country as an advocate for social justice who would not be compromised in the electoral process, unlike his predecessors.

“The image served as an online expression of outrage against rumors that (President Goodluck’s) Jonathan’s administration was planning to replace Jega with someone who would help the incumbent government and disenfranchise the people. “

Yékú included an Instagram post naming Jega as Jegai, mixing his name and likeness with those of “Star Wars” Jedi Knight heroes, and stopping would-be cheaters with an iconic line from the action movie. This remixing strategy, Yékú said, is central to how the cultural netizen comes forward to describe digital genres of popular culture in commentary discourses.

Another school of memes often employed in Nigerian political discourse online and cited in “Cultural Netizenship” comes from an Instagram account the creator calls “Yoruba Bollywood”, in which scenes from Hindu-language Indian cinema emanating from Mumbai are reoriented with a new topical dialogue. . Yékú analyzed these memes with others from the domestic film industry in Nigeria, aka Nollywood – the classic iteration of which provides content for comedians online.

In the book, Yékú documented how social media is enabling “a golden age” of political humor that is produced by non-elite everyday users on the Nigerian internet.

“The more controversial a political topic is, the more likely it is to become a topic of viral humor on social media,” he said.

And yet, he said, comedians who make their feelings known in this way are relatively safe because governments don’t always believe serious criticism of the state is taking place online. But that is not the case with activists and bloggers, whose resistance is a risk in Nigeria today, even if it is nominally democratic.

“What is important is not whether you have freedom of speech, but whether you have freedom after speech,” Yékú said, referring to a quote from the former Ugandan strongman. , Idi Amin, to mark the authoritarian nature of power in Nigeria. “When the government arrests a blogger, they’re not arrested for blogging or tweeting content. It’s on other spurious charges, especially when you’re seen as an anti-government agent online.

So why is Nigeria’s endemic corruption leading content creators to respond so clearly with humor online?

“I think this question has always been asked whether we should laugh in the face of tragedy,” Yékú said.. “Today, people are producing memes and humor on the internet as emotional responses to the war that started when Russia invaded Ukraine, right? During the Holocaust in the 1940s, some scholars initially lamented the barbarity of writing poetry after Auschwitz, but poetry was eventually seen as a practical means of responding to tragedy in Germany and Europe in general. .

“Anyone who views aesthetic forms as incapable of understanding human misfortunes must remember that human societies around the world have always looked to the artistic imagination to make sense of tragedy,” Yékú said. “In the case of Nigeria, the abjection of life calls for the use of humor as a means of laughing at suffering.”

Yékú cited the title of Nobel Prize-winning Nigerian author Wole Soyinka’s 2021 novel, “Country Chronicles of the Happiest People on Earth”, (Penguin/Random House) as another example of political satire that s attack on the pessimism of life in Nigeria. The headline, he said, underscores the irony of a study from the early 2000s which found Nigerians to be the happiest in the world.

“Of course, a lot of people didn’t necessarily think that was true,” Yékú said, “but there’s something about those kinds of assumptions, and that’s people always find a way to smile and to laugh despite the economic oppression. People find a way to continue having fun and producing what the French call jouissance, despite their precarious state. Thus, the sociological facts of abjection in Nigeria are the conditions of the relevance of social media humor.