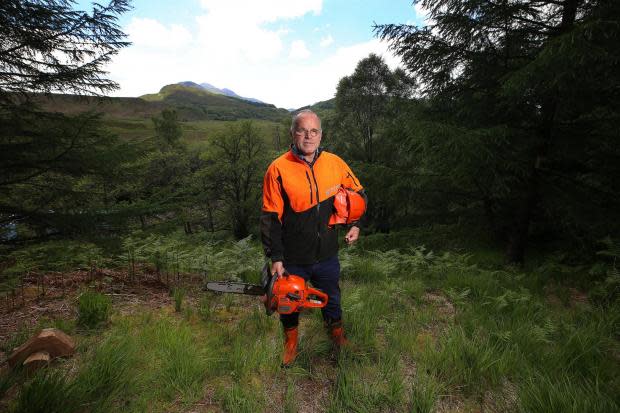 Former MSP and land rights campaigner, Andy Wightman expressed his disappointment at the Scottish Government’s consultation for a new Land Reform Bill, published on July 4, saying “the opportunity has been missed to pass a more fundamental change.

“The proposals,” he wrote on his blog, “appear to be designed simply to introduce more accountability and transparency into the land market rather than enact structural reform.”

In a bid to inspire the changes he feels are needed, he plans to publish his own Land for the People Bill and in an interview for the Herald Magazine he outlined some of the things he would like to see changed – many of which will be in his bill.

Wightman said: “Scotland does not have a comprehensive, well thought out land policy which decides what we want to do with our land, how it should be held and used. What we should try to do is to democratize the land. This is to ensure that more people have more control over how land is owned and used. It’s a big topic. It’s an occupancy issue, it’s a tax issue, it’s a property issue, it’s a regulatory issue, it’s an environmental policy issue, it’s a housing issue . The government should have a mission defining what it is trying to do. And everything else should fit into it.

“Land reform is a bit like climate – climate policy has to be cross-cutting, and to a large extent the government is failing on climate policy and it’s difficult, but I think they’ve done a pretty good job. to make it cross-sectional. People are now thinking about it in relation to their own sectors. But that hasn’t happened with land”

1.Bring all land, including agricultural land, into the tax system. “Agricultural land was left aside in the 19th century. Land worth millions is not included in the rating system. You can have a farmer on the edge of Newton Stewart in Galloway with a multi-million pound business paying no tariffs and you can have the fishmonger and butcher paying £20,000 a year in the town.

2. Make the atmosphere a common good: “If you own land in Scotland you possess it, in theory, from the center of the earth to the heavens above. If you own a square hectare of land you own a pyramid – now it doesn’t go all the way to the center of the earth or the heavens above eg when civil aviation started they had to pass laws to say that ordinary civil aviation didn’t need to get permission from every landowner to fly from London to Edinburgh, so they nationalized the airspace. One of the aspects of the bill is to transform the atmosphere in the Commune. The air itself will be a common good. The landowner will own up to the limit of your development rights, the limit of the tallest tree or tallest building. But beyond that is common. And that means we can regulate the carbon market. Because people will have to pay or be paid to extract the carbon. People will pay to pollute it. So that’s one aspect of the bill.

4. Reject the carbon offset market. “The government has set a target to increase the so-called forest carbon market by 50% by 2025, but has not explained why it wants to do this. There is no logical reason for Scotland to try to stimulate the offset market. We should limit offsetting as much as possible, so that every hectare of wood here is a net carbon capture, not just offsetting a dirty cement plant. I have no idea why they want to do this and it just led to this boom. Which I think is going to collapse because so much of this market is unregulated. It is voluntary.

Wightman has looked at the government’s carbon offset registry and says what he sees there doesn’t make sense. “People say they lock up the woods saying there’s no fall, no lean for a hundred years. And you think that gives you a lot of carbon, but why not cut it down at fifty, take it to the sawmill, make lumber, build a wooden house and then it’s another 100 years locked up and then s they reuse the wood, it will be another 100 years locked up. You have wooden houses in Norway that are 800 years old. We should lock in as much carbon as possible and not just leave it standing, we should use this damn thing.

5. Set up a registry of remaining land so that it cannot be “bought and bullied” and “modernizing common law so that local communities can regain control of their historic lands”.

Instagram Carousel Ideas That Will Increase Your Engagement (With Examples)

How to Quickly Find Blog Post Ideas with Semrush