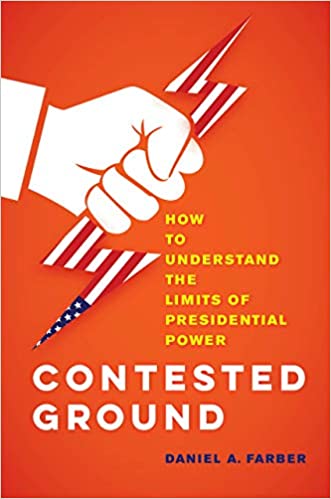 How to understand the limits of presidential power

I am delighted to announce that Professor Daniel Farber, one of the country’s top constitutional scholars, will be posting a guest blog this week on his new book:

Here is the editor’s summary:

The Trump presidency was not the first to spark controversial debates over presidential power, but its impact on those debates will reverberate well beyond his tenure. The same rules should apply to all presidents: those whose abuse of power we fear, as well as those whose exercise of power we applaud. In this brief but expansive guide to the presidency, constitutional law expert Daniel Farber traces the limits of presidential power, from the fierce disputes between the Framers to those raging today. Synthesizing history, politics and established law, Contested land also helps readers understand the loopholes and gray areas that fuel these heated conflicts over the limits and controls of presidential authority.

From appointments and moves to wars and emergencies, Contested land investigates clashes between branches of government as well as between presidential power and individual liberty. Importantly, Farber exposes the substance of constitutional law and how it relates to constitutional politics, a relationship that guarantees an evolving institution, strongly shaped by the course of history. The nature of the position makes it difficult to find the right balance between limiting the abuse of power and authorizing its exercise if necessary. As we reflect on the long-term implications of a presidency that has tested these limits of power at every turn, Contested land will be essential reading long after the current political climate stabilizes (or not).

And the presentation texts:

“This is a wonderfully readable and insightful book on a subject of enormous importance: the constitutional parameters of presidential power in the United States. Dan Farber expertly guides readers through multiple aspects of the subject, including constitutional text, methods of constitutional interpretation, and the roles played by law, politics and history. “—Heidi Kitrosser, University of Minnesota Law School

“Farber, one of our country’s foremost constitutional scholars, offers a brilliant analysis of the constitutional limits and historical abuses of presidential power, a problem that has tested our democracy from founding to the end of the day. Trump era. politics, individual rights and the separation of powers, this is an essential book for anyone wishing to understand the main challenges of our past, present and future democracy. —Geoffrey R. Stone, University of Chicago Law School

“This book is a masterclass on the law and politics of presidential powers. Drawing inspiration from foundational debates, modern political practice, and Supreme Court jurisprudence, Farber clarifies the limits of executive power. circuit for Farber. “- Richard Albert, University of Texas at Austin

“Addressing our national agitation over the nature, powers and legitimacy of the presidency, here is an accessible, brilliant and balanced book that anyone interested in these matters should want to read. —Peter L. Strauss, Columbia Law School

“Friciously open-minded and complete. Farber writes beautifully and clearly, and he meticulously presents both sides of every problem. I don’t agree with much of what Farber concludes, but it’s a scholarly and timely book! —Steven Gow Calabresi, Northwestern Pritzker School of Law

“Is the president too powerful or not powerful enough?” Dan Farber’s intelligent and engaging book weaves together law, politics, history and common sense to give readers of all backgrounds a new way to think about this crucial question, which does not depend on the approval or not of the holder. —David A. Strauss, University of Chicago Law School

Bonnie Snyder (Foundation for Individual Rights in Education) Guest-Blogging About…